Businesses from across Lancashire have announced their support for the 2018 return of a charitable criterium race series at the UCLAN Preston Arena.

UK manufacturer Glasdon, with bases in Blackpool and Poulton-le-Fylde, have confirmed they will continue as the headline sponsor of the Lewis Balyckyi Crits Series for the third year running.

Additional support and a new prize structure will be provided by sponsors Paul Hewitt Cycles of Leyland, Springfield Financial of Preston and sports nutrition brand N-Fuse.

From humble beginnings as a single race on Blackpool Promenade in 2012, the event moved to the Arena in 2016 to accommodate its new league format with races spanning an 18-week period for racing cyclists of all ages. 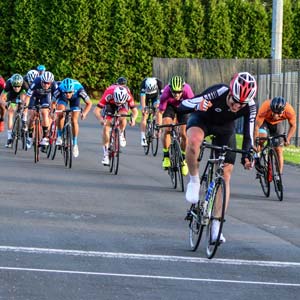 The success of the 2017 series enabled a donation of £8000, the highest single donation made to the Trust to date, which organisers say is a testament to the loyal local racing cyclists (pictured) that turned up, week in week out, with over 800 entries recorded and tremendous support to the annual raffle. This sits alongside other successful fundraising events organised by Jacqui and Kevin Balyckyi including the annual Lewis Balyckyi Memorial Ride that takes place every October around the lanes of West Lancashire.

“Every year the event grows from strength to strength and the support from local and regional cyclists has been absolutely outstanding.

“We hope that with our continued sponsorship, this year’s Lewis Balyckyi Crits Series will attract even more participants to top last year’s fantastic fundraising effort and put this event firmly on the UK’s criterium racing calendar.”

The Lewis Balyckyi Trust is a registered charity with the primary aim of supporting talented cyclists under 23. They were inundated with applications from young cyclists for the 2018 season and after careful consideration Ben Hetherington, Frazier Clacherty, Charlie Tanfield, Ben Spencer, Tom Knight, Lauren Pestana and David Reece were selected to receive funding and support this year.

“The support from local businesses helps tremendously as the set-up costs of the event can be daunting. Without this help we would have to divert funds from the riders to pay for the Crits, which would mean less young people being supported.

“And the loyalty the racers have shown is second to none. For 21 weeks last year they turned out in all weathers, with some sending in their entry fee even when they couldn’t turn up to race, just because they wanted to support us.”

In addition to set-up costs being covered by the headline sponsor, Glasdon, N-Fuse will be presenting the series and handing out samples of the nutritional products throughout. Prize sponsor, Paul Hewitt Cycles will also be offering £10 shop vouchers for the winner of every single race, while Springfield Financial have stepped up to sponsor the race numbers.

“I am hoping the new prize structure will encourage even more riders to turn up every Thursday. With special on-the-spot prizes also being awarded, the riders will really have something to aim for on a race-by-race basis.

“Riders can rest assured that the events will run like clockwork with rider safety as a priority...a pledge that can only be realised through hard work and teamwork to make the dream work!”

The 2018 Lewis Balyckyi Glasdon Crits Series will start on Thursday the 29th March.
Visit balyckyicrits.org.uk for more information and how to register.